The Boston Red Sox received their bling-tastic 2018 World Series championship rings prior to the team's home opener on Tuesday afternoon at Fenway Park. Glistening with 185 gemstones weighing a total of 15 carats, the ring is a fitting tribute to what has been called a "team for the ages."

The dominant Red Sox of 2018 notched a franchise-record 108 wins during the regular season and then pummeled three postseason opponents — the Yankees, Astros and Dodgers — at an 11-3 clip to secure their fourth title since 2004.

The iconic Boston "B" logo on the face of the 14-karat white gold ring is formed by 21 custom-cut genuine rubies, which represent the four World Series titles won by the Red Sox during the 17 seasons of Fenway Sports Group ownership. The logo is framed by 22 intricately set custom-cut blue sapphires, which represent the Red Sox’ 14 post-season games and eight home runs hit during the World Series against the Dodgers.

The 14 channel-set diamonds accenting the top of the ring — seven on each side — symbolize the total number of American League pennants won by the Red Sox since the franchise was established in 1901.

A cascade of 128 diamonds in two rows add to the brilliance of the ring, but also represent the 119 franchise-record wins in 2018 and the nine World Series titles.

Overall, the ring features 4.5 carats of diamonds, 6.5 carats of blue sapphires and 4.0 carats of rubies for a total gem weight of 15 carats. 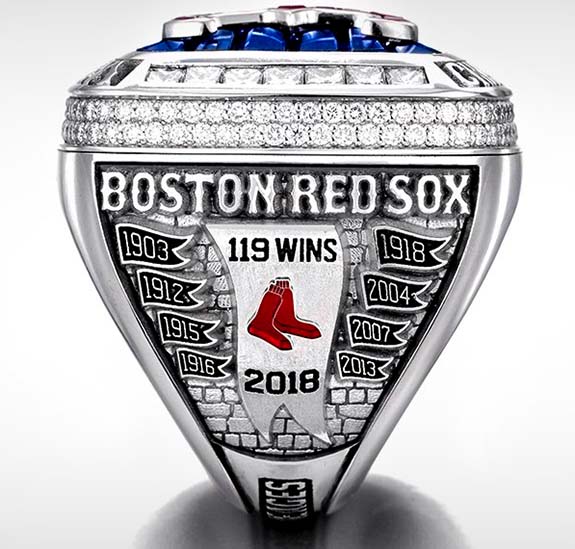 The left side of the ring displays eight pennants featuring the years of previous Red Sox World Series titles. The ninth and largest pennant pays tribute to 2018's franchise-record wins and is punctuated by the famous double Sox logo. In another nod to the team's championship history, the depiction of 100 individual weathered bricks of Fenway Park form the background of each side panel to celebrate the centennial of the famed 1918 World Series Championship. 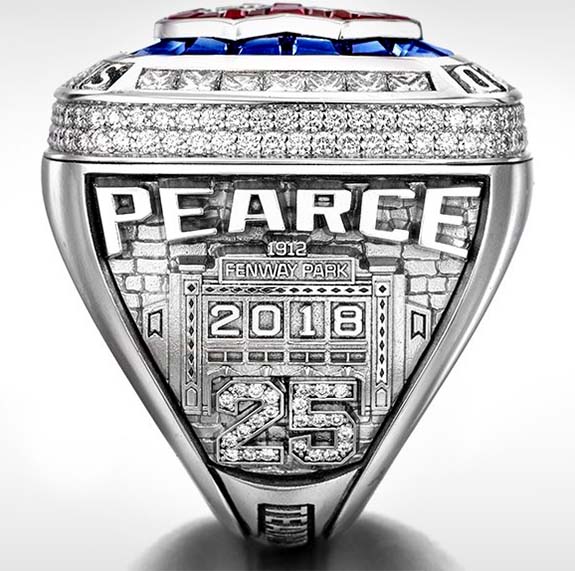 The name of each recipient appears on the ring's right side, rendered in the Red Sox jersey font. The ring belonging to Steve Pearce, the 2018 World Series MVP, showcases his jersey number 25 rendered in pavé-set diamonds. Pearce's name and jersey number frame an intricately detailed façade of Fenway Park, the oldest ballpark in Major League Baseball.

Highlighted on the Fenway façade are two historically important years — 1912 and 2018. The smaller of the two dates displays the year Fenway Park opened. That year, the team won 105 regular-season games — a record that stood for 105 seasons until it was broken in 2018 by a team that captured 108 regular season wins. 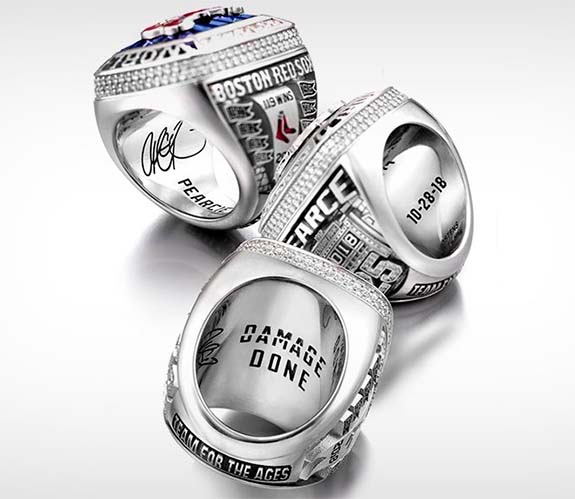 Inscribed on the interior of the ring is "10-28-18," the date of the World Series victory and the date the team's post-season slogan of "Do Damage" was changed to "Damage Done." In recognition of the exceptional contributions of the players and the coaching staff, the declaration of DAMAGE DONE appears on the interior alongside each of their signatures and nicknames.

The finishing touch on this championship ring is an expression on the palm crest that captures the talent of the 2018 Red Sox and their place in baseball lore: TEAM FOR THE AGES.